Scotland under-20s captain Connor Boyle was frustrated that his side did not take their chances after the break against South Africa on Tuesday, but believes there are plenty of positives to take into the New Zealand match.

The Scots were playing the Baby Boks in their Pool C opener in the World Championship in Rosario in Argentina.

And they competed with South Africa for 65 minutes before the opponents found another gear to win the game 43-19.

The Scots went behind to an early penalty before an unconverted try from Murphy Walker put them 5-3 up. 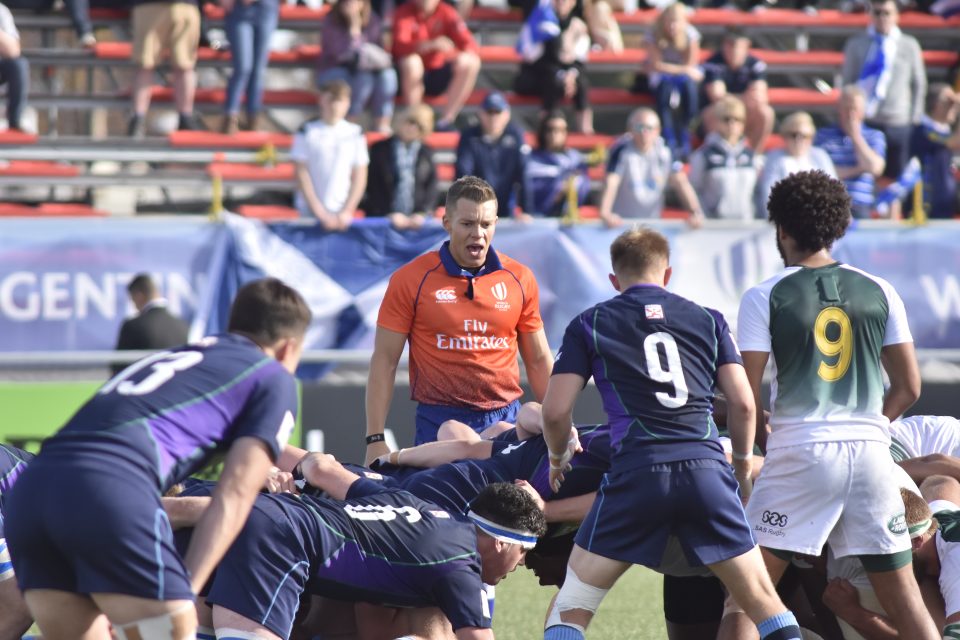 Two tries from South Africa put them 17-5 to the good, but Scotland’s forwards started to come into things and on the stroke of half-time they were awarded a penalty try.

A second try from South Africa’s Jaden Hendrikse put them 22-12 up, but a well-worked score from Cameron Anderson – converted by former Stewart’s Melville pupil Ross Thompson – closed the gap to three points.

Tries in the 67th, 69th and 79th minutes knocked the stuffing out of Scotland as South Africa won 43-19.

Watsonians back-row Boyle said:  Going into half-time, we knew we were right in it, but we came out in that second period and created four or five chances that we unfortunately just didn’t take.

“South Africa were very accurate and with every line break they seemed to execute well and score tries. We lost the ball at several key stages in the game and you just can’t do that at this level.

“We’re pretty disappointed with how we let their runners penetrate that defence and they certainly made us pay.

“We’ll go away and reflect on a performance where I thought there was a lot of positives to take. We’ll regroup and come out all guns firing with New Zealand next up.”

Try scoring prop Walker of Stirling County said:  “I’m proud of way we stuck in as a team, but it is pretty frustrating, to be honest. At the 60 minute mark there were three points in it and we had momentum after scoring so I think we should have capitalised, but a couple of mistakes let them back into it.

“It is not an easy opposition to come up against in a few days time in the shape of New Zealand. What we briefly discussed at the end of the South Africa game was our conversion rate – as soon as we get in that ‘gold’ zone of the ‘22’ we need to finish off our hard work.

“A lot of confidence can be taken from our performance. If you look at the first 60 minutes, how well we managed the game at half back and how well we stuck to our game plan, I think it really shows that we have bought into the cause.

“I think we showed that if we play well then we can beat teams and I’m sure New Zealand will have taken notice. So, we need to play the full 80 like we did the first 60 going forward.”

Thanks to World Rugby and Scottish Rugby/SNS for the images