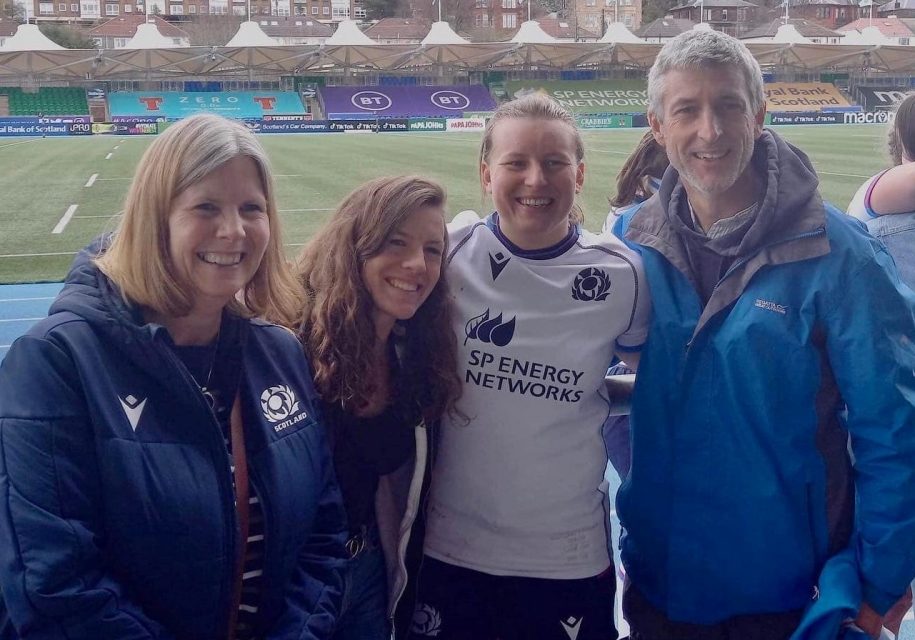 Calm, organised, intelligent and calculated are all words that have been used on many occasions to describe Sarah Law as a rugby player in the last few years.

However, her usually unshakably calm exterior slipped somewhat on April 10 when she finally earned her 50th cap for Scotland after nine years of highs and lows in a dark blue jersey.

Stand-off Sarah was clearly emotional at the end of the TikTok Women’s Six Nations game against France at Scotstoun in Glasgow because, as she admitted herself after coming on as a second half replacement, she did fear that the day might never come.

Since her debut as a teenager against England off the bench in 2013, Sarah, now 27, has had to fightback from a number of lay-offs, most notably being out for 11 months with a complex ankle issue between 2018 and 2019.

“There have definitely been some highs and some lows,” Sarah, who used to play scrum-half before becoming a 10, reflects. 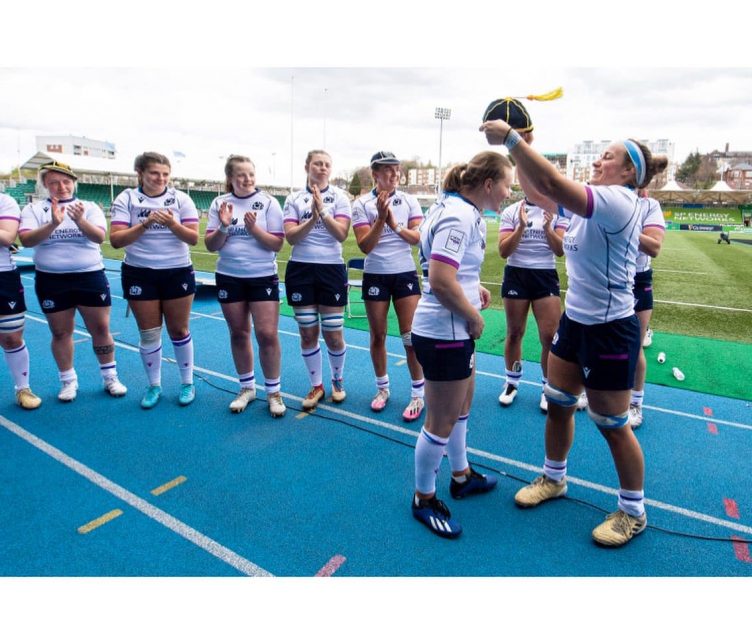 “During the tougher times there have been a lot of physios who have had a lot of input over the years and it was nice to get good luck messages from some of them during the France weekend.

“I’m not sure if any of them would have thought I’d get to 50 caps either, but they helped me put in the hard work and it has paid off.

“And my family have been everything. They’ve been at just about every game since I started, not just playing for Scotland, but club games too.

“It was great to have them there at the France game.”

Sarah, now a data analyst with an applied maths degree and a masters degree in operational research with data science behind her, mentions that “family have been everything”, so let’s catch up with them… 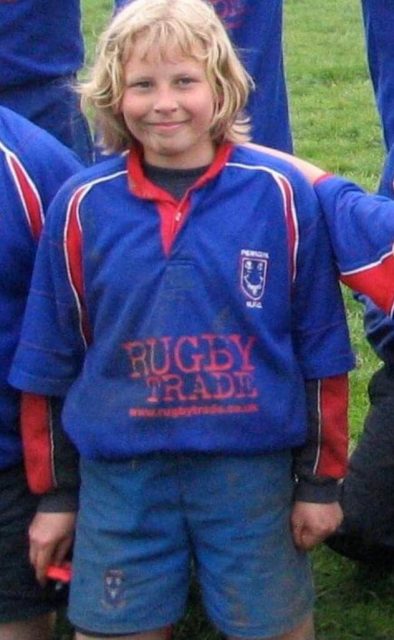 “I am just so proud of her”: Dad Andy

Sarah’s dad Andy is originally from Coventry and moved up to Scotland in 1986 to undertake a PhD before he joined local rugby club Penicuik in 1987.

When Sarah was two weeks old she went to her first rugby match, knowingly or not, when she was on the sidelines watching Andy play for Penicuik.

Fast forward a few years, and both Sarah, and then younger sister Rachel, began to play for the minis at Penicuik. Rugby has been a massive part of their lives ever since.

Andy is now president at Penicuik – a great community club in Midlothian – and Sarah still has many connections there, but as she has gotten older her own rugby journey has taken her on to Murrayfield Wanderers, Edinburgh University, and current club Sale Sharks.

“Sarah and Rachel were always around the club at Penicuik from an early age – they both just love the game,” Andy said.

“Dawn [Sarah’s mum] and I have done whatever we can to try to help her along the way, but everything she has achieved, and where she has got to, is all down to her and her hard work and self-discipline. 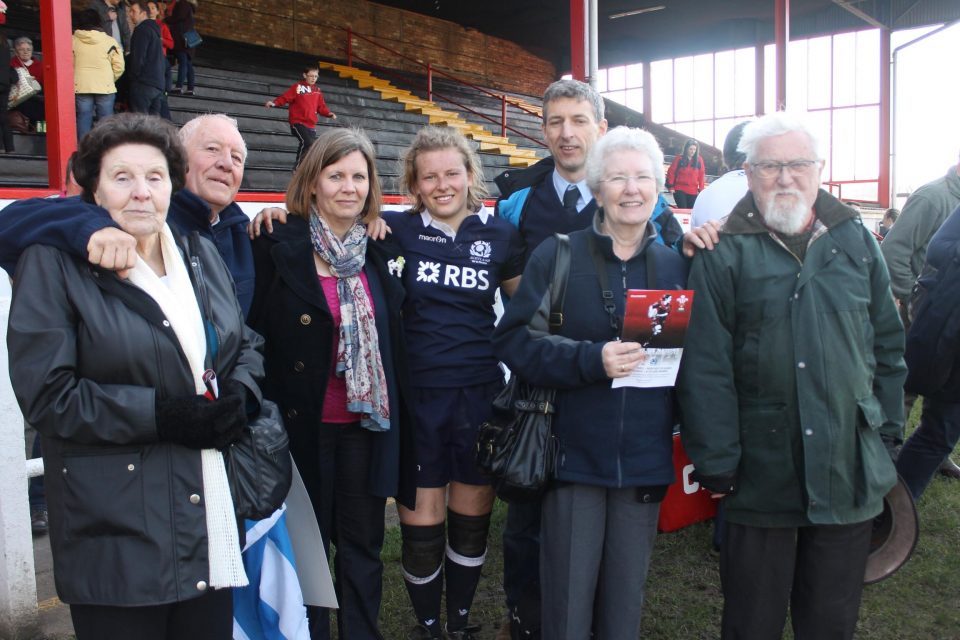 “I’m massively proud whenever I see her running out for Scotland – she always gives 100 percent and is so honoured to be in the national set-up. It’s what she lives for.

“She has had ankle injuries, other injuries, surgery, rehab and all the rest. Some of those were really serious and there was a time when it looked as if she might not be able to walk properly without pain, let alone play rugby again but she has always battled her way back. The fact that she’s got herself back to playing at international level is testament to her as a person.

“Whilst doing all of that she has also studied hard and now has a hugely demanding job so I really take my hat off to her and the way she has managed everything. 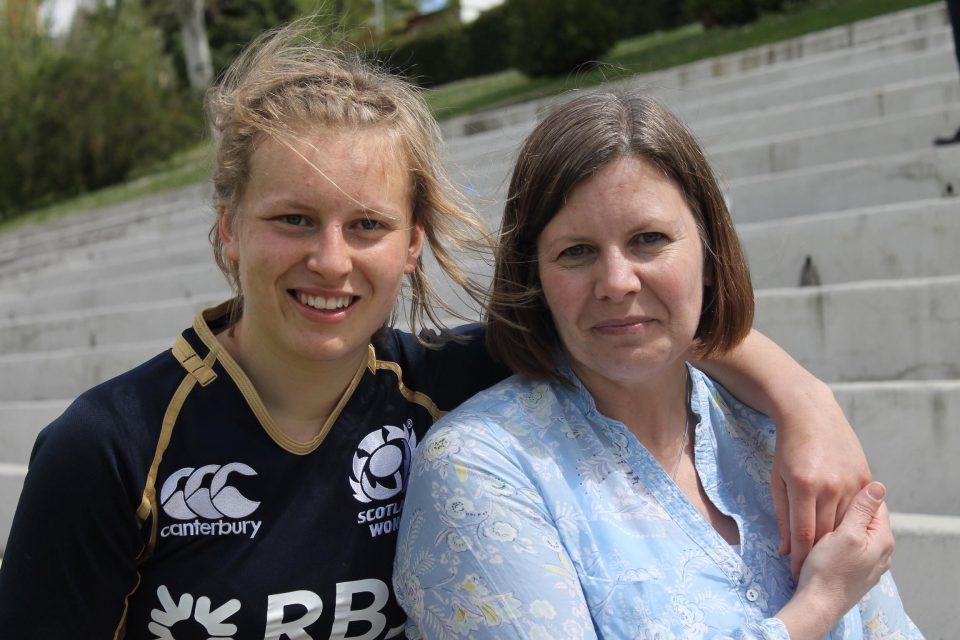 “From the first ever session she just loved rugby”: Mum Dawn

Sarah was around seven when she started playing rugby properly with the Penicuik minis and, as mum Dawn recounts, from the first time she started passing a ball about with her new team mates that was it.

“From the first ever session she just loved rugby. I remember going down to a tournament early on in those days at Biggar and the home team were quite bemused that Penicuik had a girl in their team, but it did not phase Sarah and she just got on with playing in the game,” Dawn said.

“At the time there was a Midlothian Ladies team playing out of Penicuik, so Sarah used to spend Sundays watching them and trying to gain tips from the older players.

“That is when she realised that there was women’s rugby for adults and she clearly wanted to be a part of it when she became old enough.

“In the early 2000s we then went to watch a Scotland versus Sweden women’s game at Murrayfield because Andy had been at school with the Swedish coach.

“Scotland won the game, the players came off the pitch and they were emotionally celebrating the victory with their families.

“Sarah said to me ‘why are they so happy and crying at the same time?’ and I said ‘because they are so proud to play for their country’.

“She replied ‘will you cry if I ever play for Scotland?’ and I said ‘yes, every time’.

“I think that day a seed was planted in her mind and she was determined to become an internationalist.” 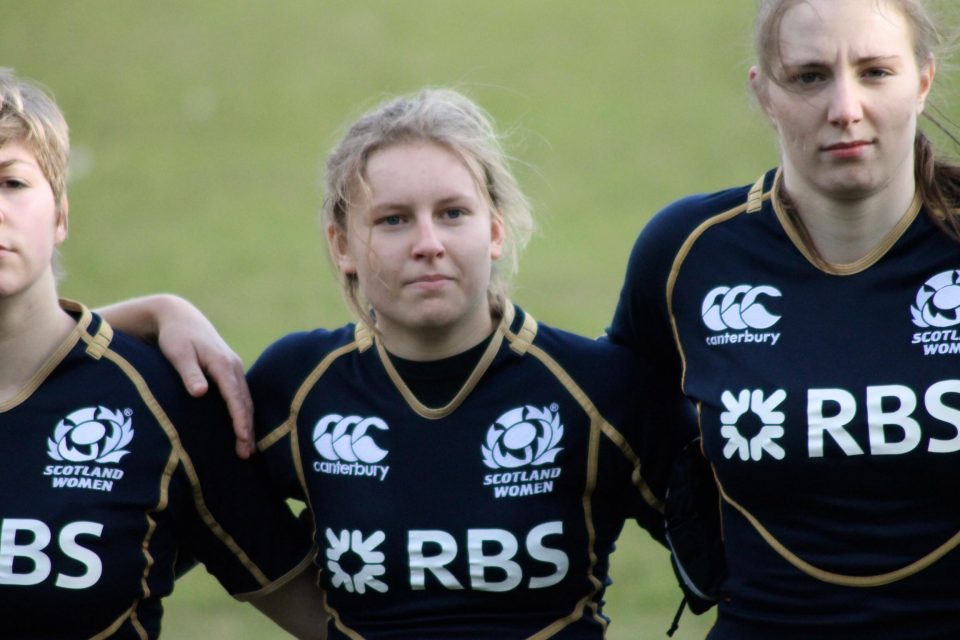 Fast forward a few years and Dawn has now cried approximately 50 times watching international matches and hopes to do so at many more in the future!

Dawn may still have a Liverpudlian accent, but she has lived here over 30 years and adds:  “I am Scotland’s biggest fan now!

“It has been amazing watching Sarah and her close friends build up into a national team that is going to a World Cup later this year.

“They have done so well and are so tight knit and seeing Sarah playing at such a level is such a great feeling, it really is, and she deserves all the praise she is getting.” 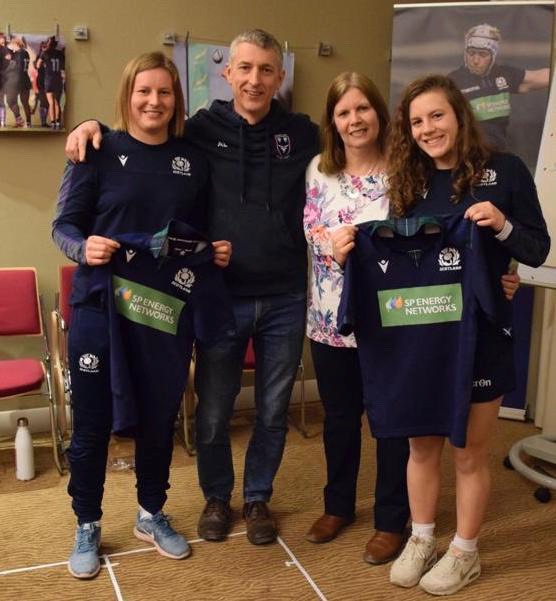 “To play together for Scotland would be a dream”: Sister Rachel

As mentioned, Sarah has a younger sister Rachel, now 23, and she loves rugby just as much as her sibling.

She too has had injury issues to deal with, but over the years has already played for Penicuik, Murrayfield Wanderers, Edinburgh University and now Watsonians as well as Scotland age-grade sides.

Rachel, who is a scrum-half having previously played back-row, has also sat on the bench for the full Scotland squad. She has never got onto the pitch as yet, but her time will come.

“To play together for Scotland would be a dream,” Rachel said.

“I remember watching Sarah make her Scotland debut at Esher against England way back in 2013 and thinking ‘I want to do that too’.

“It hasn’t happened just yet, but the way that Sarah has carried herself throughout her whole career has inspired me – and still does.

“She prepares well and works so hard at training and on a game day you can see that she is fully focused on the job in hand.

“We had a spell where we played together at Edinburgh University which was brilliant because before that I’d been too young to play in the same teams at Penicuik and Wandies.

“I have heard a lot of Sarah’s team mates say recently that she is just the loveliest person to have around as well as the coolest under pressure and I would back up both of those things.

“She is so helpful when I need help with rugby or other life issues and always has been, especially when we have both had to deal with injuriy setbacks.

“And the way she has kept calm to kick big kicks such as the ones which gave Scotland the winning points against Wales in 2017 and against Ireland last year in the World Cup qualifier has been amazing.

“Not many people have that nerve and it is a special talent, it is so good to see her at 50 caps.” 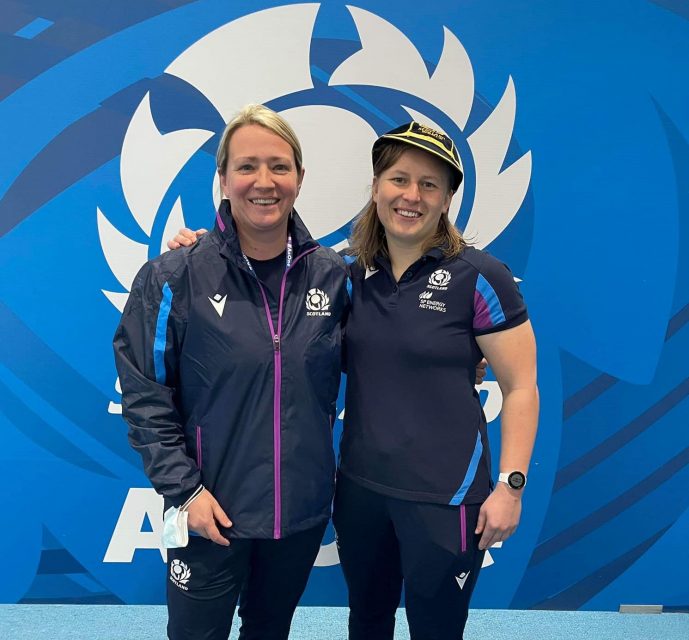 “She is a great role model for younger players”: Friend and coach Claire Cruikshank

Whilst a pupil – and eventually head girl – at Penicuik High School, Sarah played at the Murrayfield Wanderers club in Edinburgh and it was there that Claire Cruikshank first coached her.

Claire, who herself earned Scotland caps between 2001 and 2006, said:  “Sarah was 12 when I first started coaching her at Wandies and she was always just a really energetic kid who wanted to learn all the time and soak up as much information as she could about the game.

“I then worked with her at Edinburgh University and she played for us for a number of years there while she completed her various courses.

“The highlight there came in 2017 when she was part of the squad that lifted the BUCS Championship trophy at Twickenham and she played very well in that final. 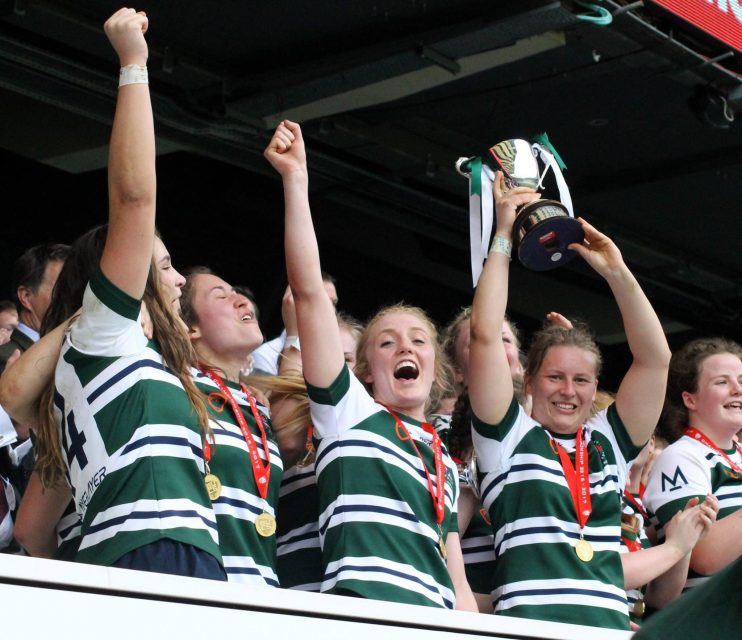 “We have been good friends since those days and it has been amazing to watch what she has done.

“When she plays she is such a consistent performer who brings so much to the team, you won’t find many who work harder than her, while when she has had to deal with setbacks she has refocused and gone again which is an admirable quality for sure.

“She is a great role model for younger players.”

Italy versus Scotland in the TikTok Women’s Six Nations kicks-off at 8.20pm local/7.20pm UK time on Saturday and is live on BBC Scotland