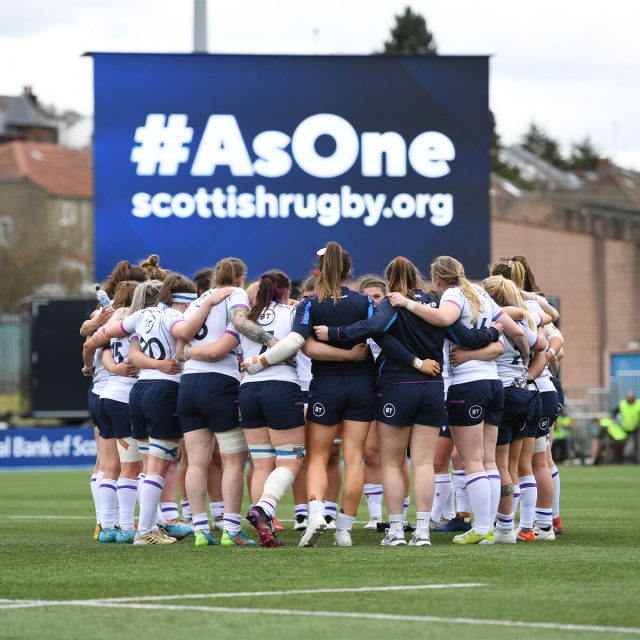 Frustration was the word on all the Scotland players and management team’s lips on Sunday after the TikTok Women’s Six Nations loss to France at Scotstoun.

In front of 2, 675 fans in Glasgow, Scotland won the second half 5-0 and can take some positives from that, but they were 28-3 down at the interval and the round three clash had already got away with them.

After the 28-8 loss – which means Scotland have now lost three from three in the competition – 27-year-old stand-off Helen Nelson said:  “I think the overall feeling in the changing room is frustration, in the first half we just weren’t good enough, we were in their ‘22’ quite a lot and just didn’t capitalise on the good pressure. We should have got more points.

“The second half was a lot better, we started to put pressure on them and it was good to do that and also keep them from scoring whilst showing our defence can stand up to the best.

“I think they kicked very well in the first half and in the backs and the back field we didn’t adapt as quickly as we should have done.

“So, there are positives to take, but we are a wee bit frustrated.

“We did really well to stop them at certain points and we turned them over or forced errors at points. We were doing really well in areas of the game, but then an individual error or a little system error in defence happened and they were good enough and clinical enough to take those chances.

“From our point of view, it is frustrating because we keep saying that we are good enough to compete with the best in the world, but it needs to be 80 minute performances, we can’t just be happy with being there, we have to show how good we can be.”

Having faced three Test matches in three weeks and had to deal with Covid in camp, other illness and injuries, the Scottish squad are now glad to have a break until the next game in Italy on Saturday, April 23.

With Scotland fifth in the table and Italy bottom the Parma clash now takes on extra importance as does the Ireland game seven days after as Bryan Easson’s charges do not want a winless Six Nations before the World Cup in New Zealand later this year.

“The bodies will appreciate a down week now, vibes in camp have been good, but a week away at clubs and at home will do everyone really good just to reset a little bit and get excited for Italy and kick on from there, we need to kick on now,” Loughborough Lightning playmaker Nelson, who now has 40 caps for her country and is vice-captain, adds.

“We have to look to win them [the games against Italy and Ireland]. Our performances have been showing that we have been getting better, even the last three games despite the scorelines there have been a lot of things going in our favour that we can take forward.

“As a result, we are 100 percent going out to win the last two games in this tournament.”

Head coach Easson states:  “It is important to get a down week, three games on the bounce is tough, three Tests in a row is tough on anybody, there is going to be bumps and tired bodies and this will be a good rest week and then we can get ready for Italy and Ireland.

“They are games that we have to look to win and that is the focus.”

The main photo is from Scottish Rugby