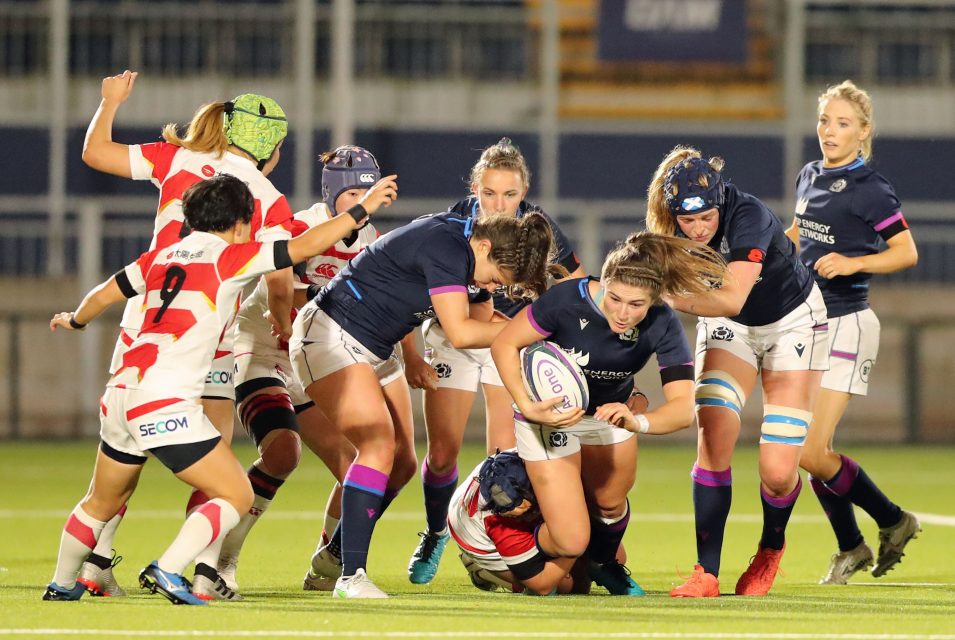 Scotland head coach Bryan Easson admits some harsh words were needed at half-time before his side really hit their stride to battle back from 12-10 down to defeat Japan, who had 14 players, 36-12 on Sunday.

It was the first time the Scots had played in front of home fans since November 2019 and a crowd of 2,346 were at the DAM Health Stadium in Edinburgh to watch an exciting Test match.

Your support was outstanding today 💙

Thanks to all the fans who joined us at the DAM Health Stadium, and to those who cheered on from home.#AsOne pic.twitter.com/7kIT2a1KFw

Japan were reduced to 14 players after 20 minutes and Scotland went 10-0 up soon after, but then for the next 18 minutes they went to sleep and the shorthanded Japanese took a two point advantage into the interval.

“Early on our lineout was excellent and our set piece was excellent, but for some reason we changed the point of contact after the red card and there was no need for that.

“We were very clear at half-time, there was no need to change anything and once we got back to what we are good at our play in the second half was excellent. That second 20 minutes was just down to complacency, but we will not do that again.

“I thought our game management and kicking game was excellent in the second half while our kick chase was good, putting pressure on Japan.

“When we got the ball it was about carrying hard into contact and then when we got it wide I thought we used it well and scored some good tries.”

Scotland took the lead here in the 12th minute through a well-worked try.

The ball was shipped right and centre Hannah Smith put winger Rhona Lloyd, later named player of the match, in for the score at the corner. Stand-off Helen Nelson could not convert.

Eight minutes later there was a flashpoint when a pass from Nelson to Lloyd saw the latter tackled high by Japan second-row Yuna Sato.

Referee Nikki O’Donnell looked at the incident with her TMO and they came to the conclusion that Sato’s arm had connected with Lloyd’s head and she was red carded.

In the 22nd minute try number two for Scotland arrived from a powerful lineout drive, hooker Lana Skeldon the scorer. Nelson missed the conversion and it was 10-0.

Fair play to Japan, despite having only 14 players they were not going to play second fiddle and, indeed, it was them who scored next.

Hooker Nijiho Nagata went over from short range in the 34th minute. Ai Hirayama, the full-back, missed the conversion.

Back-row Seina Saito should have added the visitors second try when she burst through the defence, but Lloyd and back-row Rachel McLachlan somehow got back and held her up in the act of scoring.

However, their second try did come on the stroke of half-time when tighthead prop Sachiko Kato powered over with Hirayama converting to give them a 12-10 advantage.

The Scots needed to get off to a good start in the second half – and they did.

They worked through a number of phases before full-back Chloe Rollie’s looping pass was picked up on the bounce by winger Megan Gaffney who went over for a try. Nelson converted and it was 17-12.

That was in the 44th minute and when Rollie herself scored three minutes later, converted by Nelson, Scotland were suddenly 24-12 up.

Scotland managed to kill the game off in the 63rd minute when centre Lisa Thomson ran a great line to go in for try number five with Nelson converting.

That allowed Easson to give debuts to front-row Anne Young and winger Shona Campbell off the bench.

And, into the last 10 minutes, a lovely kick through by replacement Sarah Law and some neat footwork from Lloyd saw the latter bag the hosts sixth tries. Law could not convert, but Scotland had won comfortably.