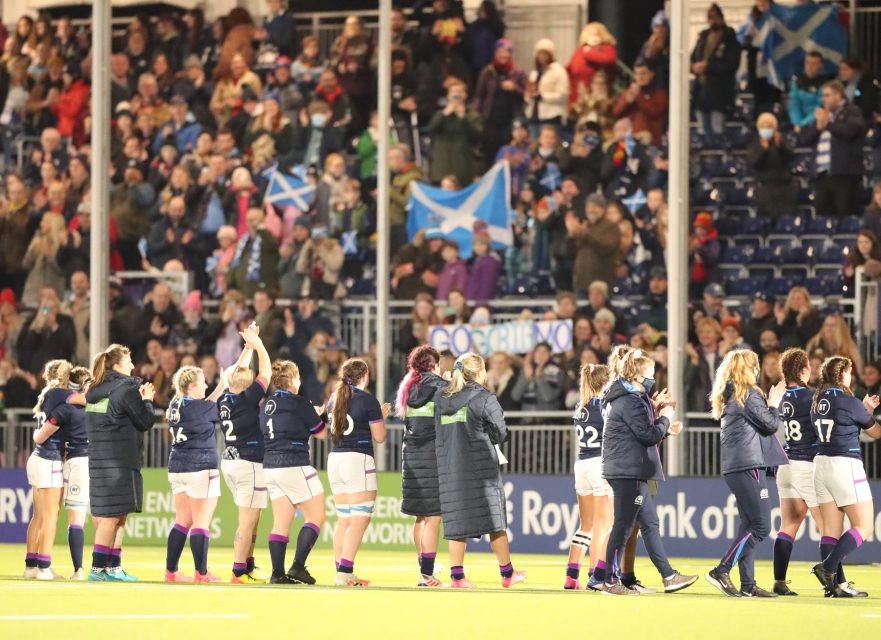 The 36-12 win over Japan which extended Scotland’s winning run to three matches was obviously very pleasing, but perhaps the most striking thing about Sunday’s Test match at the DAM Health Stadium was just how many young girls were there to watch their new role models.

There were 2,346 people inside the new Edinburgh Rugby stadium in the capital, but it felt like so many more because Scotland were cheered on from the first minute to the last and then did a lap of honour to thank those who had attended.

And the most pleasing aspect of the crowd was that so many of those present had travelled from different parts of the country with their youth sections to see an international game in the flesh for the first time.

“It was honestly one of the most enjoyable Test matches I have ever been a part of,” Scotland skipper Rachel Malcolm reflects.

“That comes down to the support, you don’t know what you’ve got ‘til it’s gone and I think not having family, friends and supporters at games in the last couple of years has been a lot tougher than I think we realised, so I was quite emotional at full-time.

“The cheer when we walked across to the far side was so noisy, hearing everyone chanting and having fun – and particularly seeing the number of young girls there – was amazing.

“When I was younger rugby wasn’t at the forefront for women and I didn’t have any role models within the sport to look up to, indeed I was in a different sport [hockey] and didn’t really know about rugby for women.

“But now we are trying to put women’s rugby out there and we want to try and help as many girls as we can to take up the sport.

“And the number of girls we saw coming to the game at the weekend was so inspiring for us and it shows what we are doing is starting to work – now we want to push on.”

“We are on an upwards trajectory, but the big thing we have talked about is to not become complacent”

By push on, 30-year-old back-row Malcolm means qualify for next year’s World Cup in New Zealand which would really drive home the message that women’s rugby is growing and is here to stay in Scotland.

To make it to the ‘big dance’ the Scots still have one more qualifying event to come which is likely to be in Dubai early in the new year and will feature themselves, Samoa, Columbia and either Hong Kong or Kazakhstan.

Scotland are currently on their best run of wins since 2009/10 and Malcolm adds:  “I think we used to be a squad where numbers 1-15 saw out a game, but now we are a squad that has lots of options, not just the 26 players in this camp, but others as well and it is so competitive for positions.

“That competitiveness in training has allowed us to really mature as a team and as a group, we are growing and pushing forward as individuals and as a team.

“I also think the exposure we have had to Test match rugby over recent months is improving our game management.

“We are on an upwards trajectory, but the big thing we have talked about is to not become complacent with that. We want to push Scottish rugby on as far as we possibly can, we all want to leave the shirt in a better place, leave a legacy and inspire the next generation to want to pull on a Scotland shirt.

“We have got an exciting opportunity heading into 2022 and everyone in and around the squad is focused on making sure we get to the World Cup.”