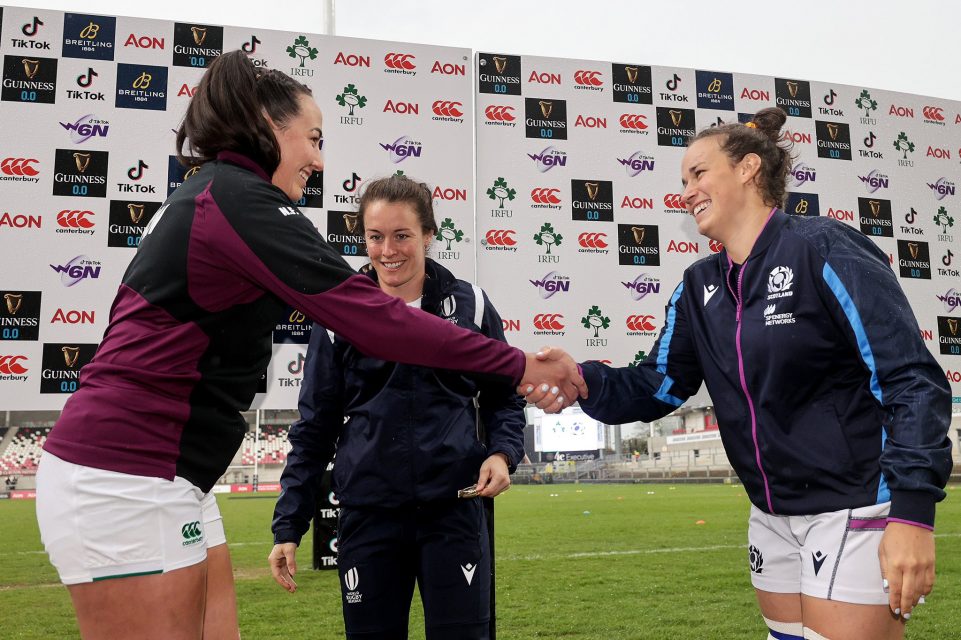 Scotland’s hopes of ending their TikTok Women’s Six Nations campaign with a win fell to pieces four minutes into stoppage time in Belfast on Saturday night when Ireland scored a converted try to win by a point.

The visitors put in an amazing effort, especially in defence, at the Kingspan Stadium and led 14-8 with the clock heading into the red.

However, Ireland centre Enya Breen bagged a try – and converted it herself – in the 84th minute to break Scotland’s hearts and give the home side a 15-14 triumph.

It means Bryan Easson’s charges lost five out of five in the tournament won by England and ended up with the wooden spoon.

March and April have been tough for the whole squad and the backroom staff, there is no getting away from that, but the bigger picture is still about building towards the country’s first appearance at a World Cup in 12 years in October and November in New Zealand.

Skipper Rachel Malcolm, the back-row, said:  “It was probably our best defensive performance of the tournament and in parts of the second half our attack was outstanding.

“Our set piece didn’t function particularly well, it’s been a wee bit inconsistent across the tournament, but I can’t fault the heart and the commitment from minute one to minute 80 from the full squad.

“Ultimately, we have had a really long two-and-a-half years and we haven’t really had any time off. There have been ups and downs on and off the pitch in that period and I think it is really important that we take some time away now.

“I think it is really needed mentally and physically at the minute and I think it has probably shown in this campaign.

There is a Commonwealth Games sevens in July, other sevens commitments, XVs commitments and then the World Cup programme to come later this year for Scotland’s best female players and Scottish Rugby are working hard behind the scenes to get the balance right for the rest of 2022, according to head coach Bryan Easson.

Last kick of the game to win it? ✅
Celebrate wildly? ✅

At the Kingspan Stadium on Saturday evening, before kick-off a minute of silence was held to mark the passing of Clare Hoppe, a member of the first ever Ireland Women’s team, who was the auntie of Scotland vice-captain Helen Nelson.

Scotland got off to a confident start and took the lead after just four minutes when No.8 Evie Gallagher went over for an unconverted try from short range.

Ireland got themselves on the board in the 16th minute when No.8 Hannah O’Connor kicked a penalty.

In the 28th minute Ireland won a scrum penalty, but O’Connor missed the resultant kick and it remained 5-3 to Scotland as the half hour mark approached.

Just before the interval Ireland took the lead after a well-worked forward drive gained momentum and saw hooker Neve Jones score a try. Breen missed the conversion and it was 8-5 heading into the interval.

Scotland started the second period with good intent and they were rewarded when Nelson kicked a penalty to make things 8-8 after 52 minutes.

And just before the hour mark another Nelson penalty made it 11-8 to the Scots.

Things got even better with 18 minutes to go when a third Nelson penalty of the half made it 14-8.

Ireland were then knocking on the door trying to score into the last 10 minutes, Scotland second-row Sarah Bonar winning a crucial penalty and then replacement Emma Orr pouncing on a loose ball on her own try line to keep them out.

Ireland just kept on coming though and got their rewards through Breen.