Cameron Lineen was not born when his father Sean was a hero of Scotland’s 1990 Grand Slam victory, but it is clear that rugby continues to run in the family.

Sean, originally from New Zealand, won 29 caps for Scotland from 1989 onwards with the centre eligible to wear the thistle through family ties.

He will always be remembered for being part of the famous 1990 squad and since he hung up his own boots he has had a big impact on coaching in this country, taking charge of Glasgow Warriors and Scotland under-20 among others.

Now 56 he continues to work with Scottish Rugby helping identify and bring through great talent – and two young Lineens are doing well in the game too. 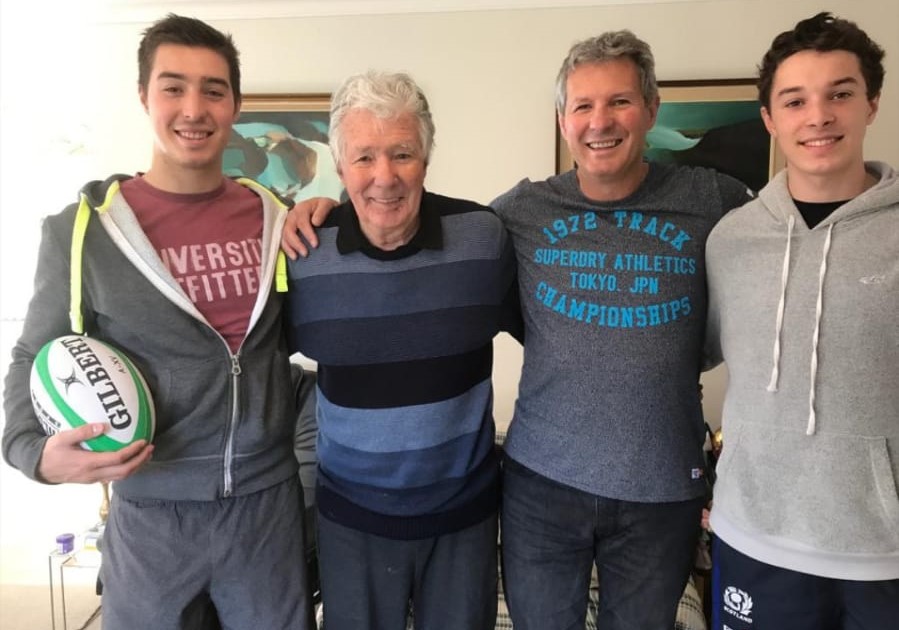 The youngest Lineen son Jacob, 19, is a Scotland age-grade cap who scored a hat-trick of tries for Stewart’s Melville College when they won the Scottish Schools Cup at under-18 level in 2016/17.

He is currently studying and playing rugby at Durham University and his older brother Cameron, 22, has just made his first XV debut for Heriot’s in the Tennent’s Premiership.

The winger, who can also play full-back, came off the bench for Phil Smith’s play-off chasers in the 50-14 success against Hawick on October 27 at Goldenacre.

His dad and mum Lynne were there to watch him and the 22-year-old said:  “With the history my dad had in the game, I was never going to get away from rugby! It has always been a big part of everything that our family did growing up and I love it. 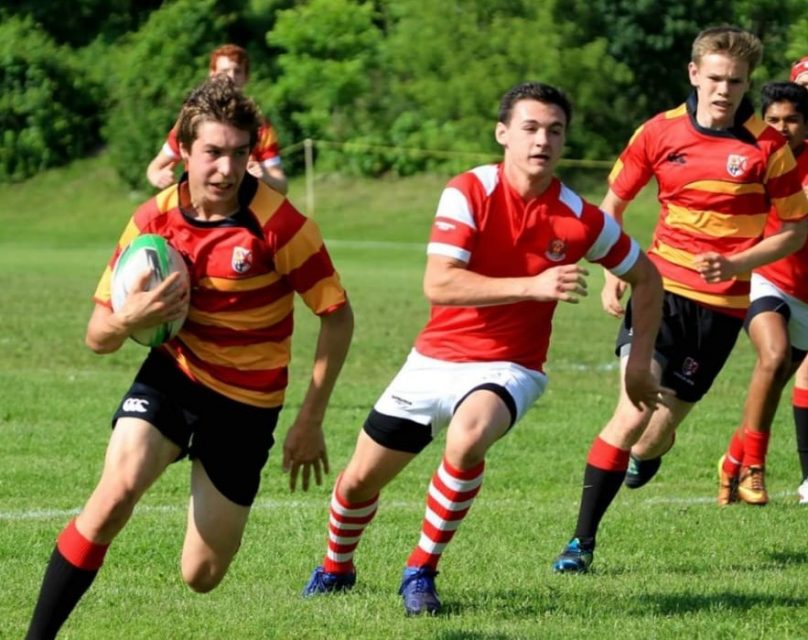 “Both me and my brother started playing down at the Stew Mel minis and from there I progressed to playing for Stewart’s Melville School.

“The rugby at school was really good fun and we had some good coaches and learnt a lot as we moved through the senior school years.”

In the 2013/14 season Cameron’s team won the Scottish Schools Shield on the back pitches at BT Murrayfield, defeating Loretto School 22-14 in the final.

The Stewart’s Melville team featured Cameron on the wing as well as current Edinburgh Rugby player Callum Hunter-Hill in the second-row.

Another Edinburgh player, George Taylor, was in the centre for Loretto.

Before heading to university in Aberdeen after school, Cameron was then in the first ever Scotland under-18 mixed Touch team that went to Swansea for the European Championship and managed to medal. 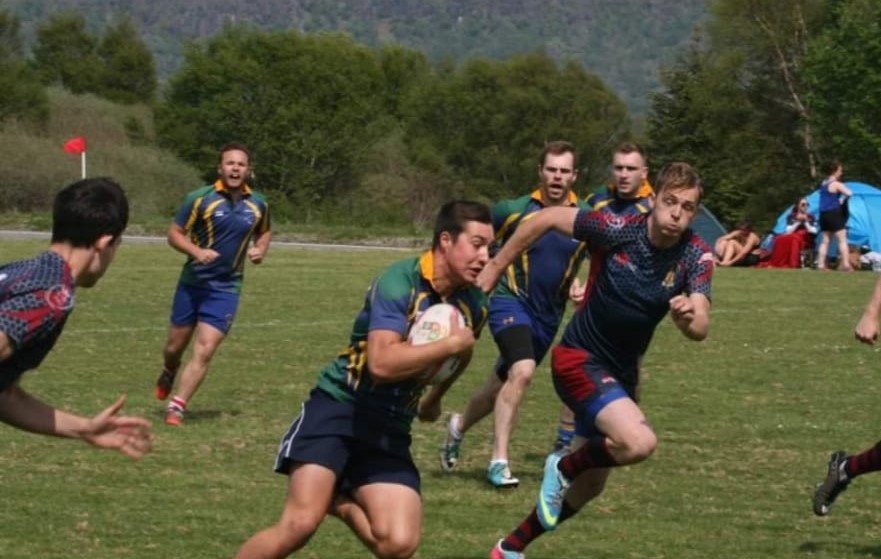 “Touch is great fun and it really helps you to work on your skills and fitness,” he stated.

“I was then up at Aberdeen University studying geography and I played with the uni rugby team during those four years which was fun.

“That course finished in the summer and now I am studying for a masters in real estate and planning at Heriot-Watt University in Edinburgh with the hope of becoming a chartered surveyor.

“I was keen to carry on playing rugby and I knew Stuart Edwards who plays at Heriot’s because he was a coach at school as well as a few other guys so I headed down to Goldenacre for pre-season and it has been really good over the last few months.

“There is a great balance of a good standard of rugby and a laugh off the pitch and throughout all of the squads there is a good culture.” 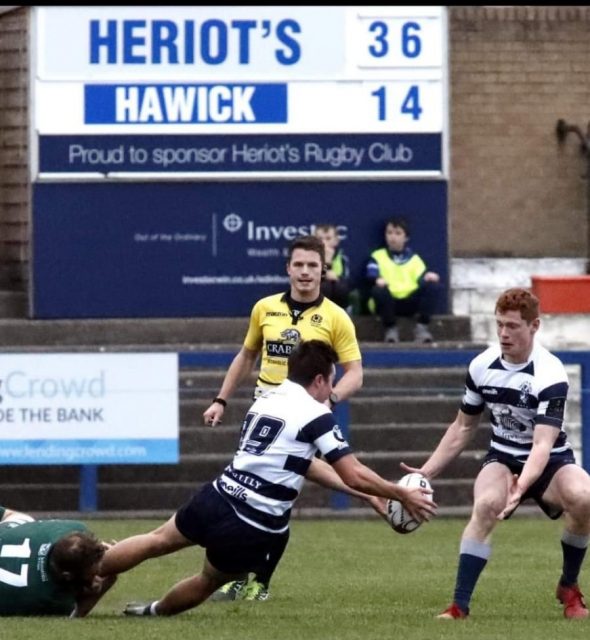 Haaving scored five tries in the first half of a match early in the season for the third XV, Cameron has been a regular in the second XV that has won 10 from 10 in Tennent’s National Reserve League One to date.

And, of course, he earned that first XV chance some 10 days ago.

“It was nice getting a run out for the firsts, there are a lot of good players to learn from in that squad,” he concluded.

“Rugby has always been a hobby for me, but I really enjoy it and I am keen to stay at Heriot’s in the coming years if I stay based in Edinburgh.

“As for dad, well he supports me in my rugby – and Jacob in his – and wants us to keep doing well. We are also really proud of what he achieved with Scotland.” 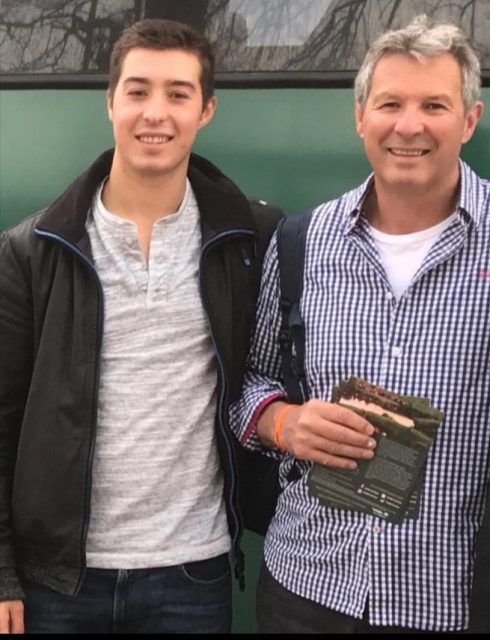 Thanks to Cameron/Dave Urquhart for the photos