Three former Merchiston Castle pupils, who are making great strides in the rugby world, were back on campus recently to meet the current crop of players who are writing their own headlines in the sport.

The school’s under-18 team won the Scottish Schools’ Cup before Christmas, and during a break from training earlier in February recent attendees Stafford McDowall, Matt Davidson and Rufus McLean met up with some of that team.

McDowall has just turned 21, and already he has accomplished a lot in the game.

After leaving the school, he impressed many while playing for Ayr in the Tennent’s Premiership as well as progressing through the ranks of the Fosroc Scottish Rugby Academy.

In 2017 and 2018, he was the heartbeat of the Scotland under-20 squad and captained them in the Six Nations and at the World Championship last year to take his cap tally to 20 at that level.

The centre made his Glasgow Warriors debut last season and has seen quite a bit of game time with the professional outfit this term, leading to him signing his first full-time contract in December and even earning a call-up to the Scotland training squad very recently.

“I spent two years at Merchiston, and I look back on them with great fondness,” McDowall said.

“The exposure to the level of rugby coaching that we had there really helped me push on my game while having such great facilities all on one campus meant that as an under-18 team we could spend a lot of time together and build up a good culture.

“In my first year at Merchiston, I just missed out on the Scotland under-18 squad, but my school coaches, led by Roddy Deans, and my teammates really helped me through that, and I went on to play for that age-grade team the following year.

“It was such a great buzz on a matchday down at Merchiston, and I will always remember that.” 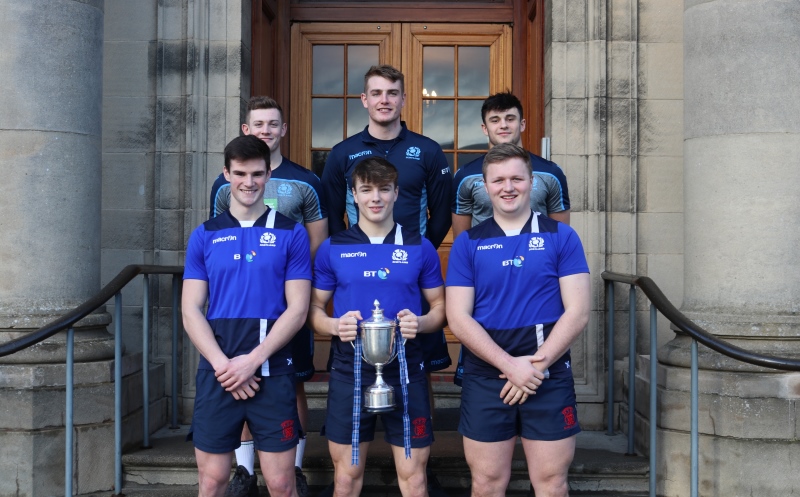 And young guns, Davidson and McLean, are involved in the ongoing under-20 Six Nations with Scotland.

Davidson, a 19-year-old full-back who played stand-off/centre while at school, left Merchiston in 2017 and said:  “I was at the school for my final two years and I thoroughly enjoyed it.

“Both on and off the rugby pitch it was a great experience, and in terms of the rugby, we worked hard as a team, but we also had a lot more time to work on our individual skills, and I felt that really helped me.

“There were some great coaches at the school, and everyone just loved rugby, so it really made me focus and take things to the next level, especially in terms of my defence.

“When I was at school, I played for Scotland under-18s before last season turning out for Ayr and then earning a deal with [English Championship side] London Scottish.

“I am enjoying that challenge of playing senior rugby and also learning with the under-20s.”

Winger/full-back, McLean, joined the school when he was eight and began playing rugby straight away.

“What I loved straight away, was going out and playing rugby with my mates, and that feeling never left me while at school,” the 18-year-old explained.

“As a young player you always look up to the 1XV and they set such a good example, so when I got there myself and was then asked to be co-captain with one of my good friends, it was a bit surreal, but a great honour.

“The way rugby is at the school certainly helped me as I left last summer and began training more regularly with the Scottish Rugby Academy and playing with Watsonians.

“Being involved with the under-20s has been great after a frustrating season, which has included a couple of injuries for myself and I think we are building up nicely to the World Championship in the summer [in Argentina].”