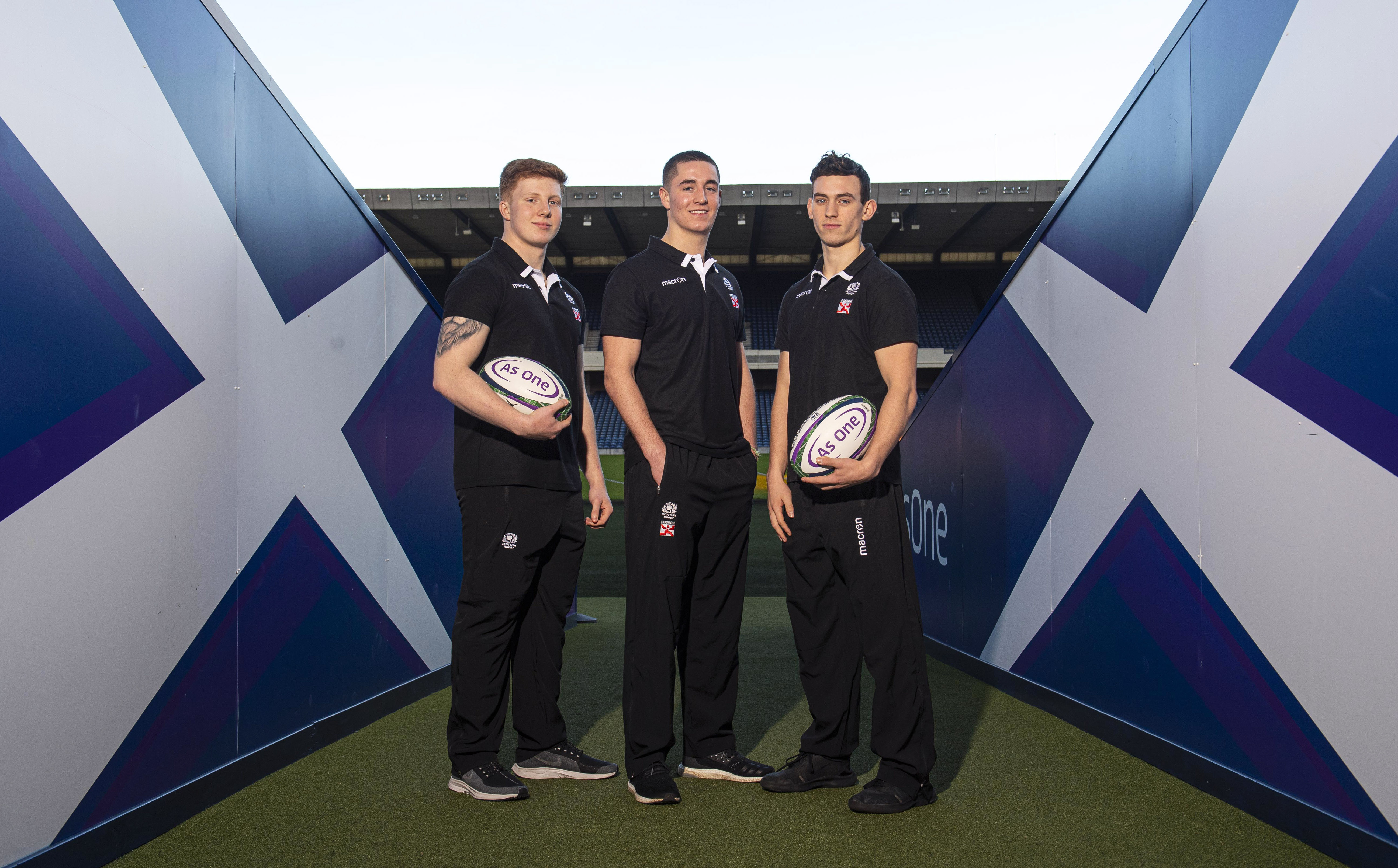 Former pupil Adam Scott (class of 2019) has paid tribute to the rugby coaching he received at St Aloysius’ College as he prepares to embark on a 15 week adventure in South Africa where he will train with top coaches and other up-and-coming players from around the world.

Early next week Adam, along with fellow 18-year-olds Cole Lamberton (Edinburgh Accies) and Mikey Heron (Stirling Wolves), will be flying off to Stellenbosch University near Cape Town after they were awarded the coveted John Macphail Rugby Scholarship.

The programme funded by the Robertson Trust – now in its 15th year – allows players to benefit from a longer period of time in a concentrated environment while keeping aligned to the northern hemisphere season.

The trip will also take the trio out of their comfort zone and allow them to experience playing the game they love in the country that just recently won the men’s World Cup.

Adam, a stand-off or full-back played at local club Helensburgh for seven years before moving to St Aloysius’ in his teens.

“I loved playing at Helensburgh and the club helped me on the way to Scotland under-16 honours, but then I had the chance to move to St Aloysius’ for my education and to further my rugby and I jumped at the chance,” Adam explained.

“While I was at the school I had the privilege of playing alongside some great players and getting to the Scottish Schools Cup final at under-16 level and winning it at BT Murrayfield is still a highlight of my career to date.

“To do something like that and play at the national stadium with your best friends is the stuff of dreams and to go back there and captain the school in the under-18 final was a great honour too.”

The St Aloysius’ team lost that one 40-7 to a strong Merchiston Castle side, but they did the school proud.

And Adam looks back fondly on the coaching and advice he received at St Aloysius’ during his year’s there.

“There were some great coaches around at the school and they were always there to give us advice, help us juggle training with our academic work and generally give us advice,” he stated.

“As a stand-off/full-back it was obviously great for me to be able to learn from someone as experienced as Mark McKenzie while, as he played 10 to a high level in his own career, he really helped me out with the game management and kicking parts of my game.

“He pushed my game on a lot and we had a good coach/captain relationship with him. His promptings and those from others at the school helped me move towards Scotland under-18 selection and they gave me a lot of pointers and tips which have helped me since I left school to be part of the FOSROC Scottish Rugby Academy, play for GHA and push for more Scotland age-grade chances.

“Now to get this chance to go to South Africa is amazing and I’d like to thank the people at the school who have helped me get to this point.

“Straight away when I was phoned to tell me about this opportunity I was excited.

“I’ve seen the names [of previous Macphail Rugby Scholarship recipients] and I’m absolutely over the moon to be following in their footsteps.

“In recent months since leaving school I have enjoyed breaking into senior rugby in the Tennent’s Premiership with GHA and I really want to use the trip to South Africa to try and take my game to the next level through a lot of hard work, I can’t wait.”

What is the Macphail Rugby Scholarship?

The Macphail Rugby Scholarship was established in 2005 as a partnership between The Robertson Trust and Scottish Rugby.

Created in memory of ex-Scotland Internationalist John Macphail (1949-1951), the scholarship was developed for talented young players but has also supported coaches.

Thanks to Scottish Rugby/SNS for the main image

St Aloysius’ College is a Catholic independent school, and the only Jesuit school in Scotland, for boys and girls aged 3 – 18.  St Aloysius’ embraces a unique education tradition that places the formation of the whole person at the centre of all learning.

The College prides itself on helping every child discover the confidence and motivation to achieve great things wherever their interests lie, be it in the classroom, on the sports pitch, in the unique Schola programme, or outdoor education, with the College currently the largest provider of the Duke of Edinburgh Award in Scotland.

With state-of-the-art facilities in the heart of Glasgow city centre, St Aloysius’ College is easily accessible, with school bus routes also in operation. Understanding the need to support working parents, St Aloysius’ offers wraparound care before and after school, as well as holiday clubs throughout the year.

Find out more at www.staloysius.org