Dejected Scotland captain Connor Boyle stated that his side “just didn’t turn up in the biggest game of our lives” as they were relegated from the World under-20 Championship at the weekend in Argentina, Fiji scoring eight tries as their pace and power stunned Carl Hogg’s side.

The 59-34 defeat in Rosario in the 11/12th place play-off on Saturday means that the Scots lost all five of their matches in the tournament, conceded 197 points and will be playing in the Rugby Trophy next year.

That tournament is likely to feature countries like Kenya, Canada and Uruguay and not being at the top table of age-grade rugby is a big blow to Scotland and their development of players.

A special mention goes to Scotland hooker Ewan Ashman who scored seven tries in five games, but questions will now be asked about how young talent is nurtured in this country and made ready to face top teams because this group were well off the pace at the Old Resian Club.

Watsonians back-row Boyle said:  “We just didn’t turn up in the biggest game of our lives, we had to be on the money, we weren’t and it was very disappointing.”

Scotland head coach Carl Hogg:  “It is devastating to get relegated out of this Championship. It is a big blow for this group of players and it is a big blow for Scottish rugby. We understood the importance and significance of this fixture, but, on the day, we just weren’t able to control Fiji’s attack.”

Fiji got off to a flying start and took the lead in the seventh minute when a good break down the left set up centre Isaac Ratumaitavuki for a try. Stand-off Caleb Muntz converted and it was 7-0.

In the eighth minute Scotland responded thanks to a penalty from vice-captain Ross Thompson.

The Scots took the lead in the 12th minute. 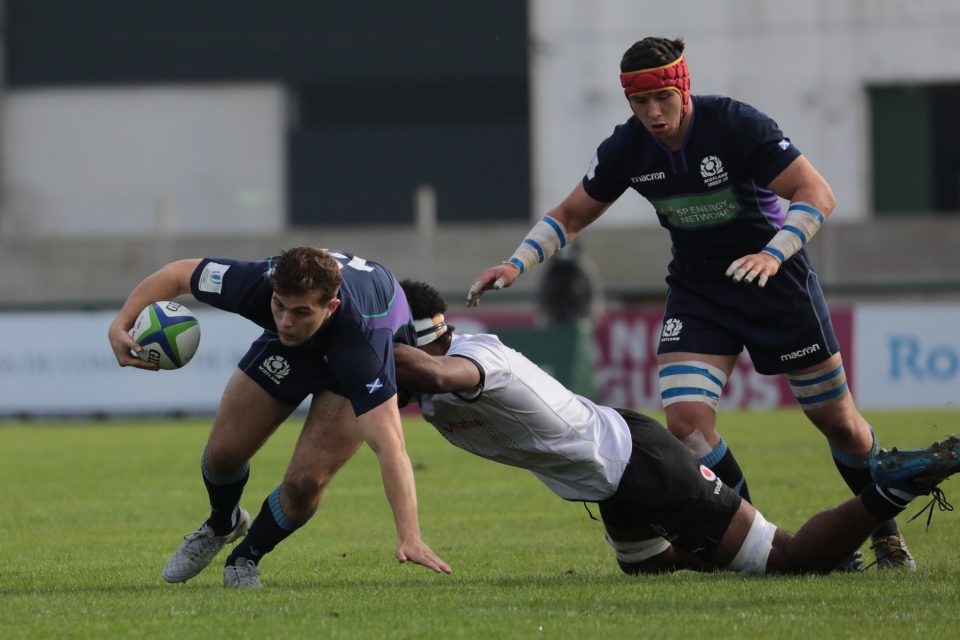 After a good driving maul – their best attacking weapon throughout the tournament – the ball was well recycled and winger Jack Blain went over in the corner. Thompson missed the conversion and it was 8-7.

The Fijians were back ahead after they broke through some poor Scottish defending to offload the ball quickly left and centre Veresa Tuquvo was the man going over. Muntz converted from the touchline and it was 14-8.

Their lead was stretched to nine points in the 23rd minute thanks to a Muntz penalty.

Seven minutes later, after playing well through the phases, Scottish full-back Matt Davidson ran onto a short ball to score under the posts with Thompson converted.

Once again the Fijians battled back though and in the 33rd minute full-back Osea Waqa ran in from 50 metres to score try number three. Muntz converted for 24-15.

They then scored two quickfire tries right at the end of the first half, wingers Kaminieli Rasaku and Osea Natoga going over with Muntz converting both to make it 38-15 at the break.

Ashman scored in the 47th minute and Thompson’s conversion made it 38-22.

Fiji’s sixth try came from Osea Waqa and the conversion reinstated their lead to 23 points.