Following on from last year’s successful event, the Bill McLaren Foundation and Trust Rugby International have arranged another Long Lunch on November 8 and they  have another fantastic line up of rugby greats with former Welsh hero Scott Quinnell and Scotland’s own legend Gavin Hastings as guest speakers. The event will once again have Glasgow’s own Al Kellock as the MC for the day.

Contact yve@tripartnerships.com to secure your ticket and hear below from Josh, Josh and Paul about the great work TRI do:

Josh Rogers developed an interest in rugby after watching his sister play in a tag rugby demonstration at Murrayfield during the Autumn Tests when he was 12.

Gross motor skills have always been a challenge for him as he has Down’s Syndrome – especially in a mainstream school environment.

When everyone is faster than you, it’s tough. In 2014, he returned from a rugby taster session at a sports club with a flyer for Trust Rugby (TRI). I didn’t think he would be able to play, but Jamie Armstrong, the director of TRI, encouraged him to come along. Unified rugby is where regular players (‘enablers’) play alongside differently abled players. Right from the start, Josh loved it.

He’s a cautious person, not confident in new situations, but wanting to play overcomes these feelings. Since then, he has had help to learn a variety of rugby skills from the enablers who play alongside the ‘red caps’ (vulnerable players). He has learnt strategies and plans. Having to plan what he needs to take with him to training and games has carried over into being more responsible for organising himself in his day-to-day life. It has also given him the confidence to travel away from home with his team.

Josh never wants to miss training or games, no matter what the weather, even though the weather sometimes gets the better of him in extreme conditions.

He is incentivised to keep fitter in order to play his part, which has huge benefits for his health, since he has a form of rheumatoid arthritis. Last summer he and I went through the Couch to 5K programme over the course of a few months in order to keep up his fitness for rugby – never something he would have done willingly a few years ago.

Rugby has given him confidence, social opportunities and a ‘band of brothers’ whom he refers to as his ‘other family’. For people with learning disabilities social interaction can be hard and rugby gives him things in common to talk about with other players, for example when Scotland player WP Nel visited Haddington Rugby Club’s Open Day Josh was able to offer him a few words of advice, one forward to another!

Unified rugby has given Josh opportunities he would never have had otherwise, he has developed and thrived though the experience. His fitness and activity levels, his social skills and his organisation skills have all benefitted.

He has represented his regional team the Edinburgh Clan in over 30 games including the ‘2015 Quaich’ in 2015 and 2016 which is TRI’s Scottish Championship between East and West.

Over and above playing for Edinburgh, Josh has been selected to represent Scotland – the national clan -at international matches including the TRI Unions Cup 2014, International Mixed Ability World Tournament in 2015 in Bradford, England, and 2017 in Gaztedi, Spain.

He has also taken part in two international festivals in Cullera, Valencia, in Spain 2016 and 2018. He has most recently represented Scotland at the Cardiff Arms Park against a Wales Select in November 2018.

Our second player we are acknowledging is Josh Nisbet, who is the other half to the Josh dynamic duo.

“I’ve loved rugby since I was a little boy watching on television with my dad. For a long time I didn’t like to think that I had a disability because I just wanted to be like everyone else and I didn’t understand why I couldn’t do what the other people at school were allowed to do.

“Then one day after I left school, we got a phone call to say that he had heard about a rugby team that he thought would be perfect for me. It was called the Clan and was training in Edinburgh. What was even better was that there was another boy in our town who played with the Clan so we were able to ask him and his parents all about it and go along with them to try it out.

“It was fantastic to go along and be able to train properly with the other players, some of them were really good players and coaches and as soon as I was 18 they encouraged me to start playing for real in real games.

“They had to persuade my mum to let me play because she was worried I would get hurt because I have Down’s Syndrome and I might have a problem with my neck so although we do full contact rugby, some of us wear a red scrum cap which tells the other team to be a bit careful and not to tackle us too hard.

“The first time I got to play for the Clan was in Arran. We had to go on a ferry and the ferry was full of other people going to play rugby in the sevens tournament. I loved being part of it and I scored my first ever try.

“I’m a winger and I’m good at that because I can run fast and because I’m small the other teams often don’t expect me to be able to play well so I can take them by surprise.

“We also have ‘enablers’ who play with us, they are usually good experienced players who watch out for those of us who wear red caps and make sure that we get our hands on the ball.

“We have travelled to Spain three times now with the Clan and played in two rugby festivals there as well as the IMART world tournament where we played for Scotland and we came third.

“My favourite memory ever is being made ‘Man of the Match’ by the Pumpas from Argentina and being carried off the field by them.

“Last year we went to Wales and played as the Scotland Unified Rugby team against the Welsh at Cardiff Arms Park in the Mixed Ability Doddie Weir Cup. Afterwards we got to watch Wales against Scotland at the Principality Stadium – that was another highlight for us.

“Last year I started my apprenticeship with TRI (Trust Rugby International) as a rugby coach and this year they have kept me on as an Assistant Activities Coach. I travel independently from my home in East Lothian all the way to Glasgow to my work.”

Last but by no means least is Paul Johnston, aka PJ, who is one of our first ever Clan players.

After completing his education at Marr College and Further Education College, Paul was seeking some form of physical exercise to keep him active.

In 2012 it was suggested by the local Health Board that he might like to attend a rugby taster session in Ayr being run by a recently established group called Trust Rugby International. Paul had never been given the opportunity to play a team sport before, but from that first session he became part of Scotland’s first unified rugby team called The Clan.

Paul said:  “I have been playing for over six years with The Clan and I train at Kilmarnock Rugby Club. My position is hooker. I really enjoy being in a team and have made lots of new friends. I have learned how to tackle, pass the ball, throw in the ball at the lineout, and be part of the scrum. I love the banter with the guys… they all make me laugh.”

Paul has played almost 100 games for TRI over the last six and a bit years, met several rugby legends, and has been on tour to Llanelli, Cardiff, Cork, Fraserburgh, Bradford and Spain – the latter three times!

“I feel very proud to wear the Scotland shirt,” he continued.

“At the Mixed Ability World Tournament in Spain in 2017, with the score at 17-17, I kicked the winning conversion against Italy in the last minute of the game to give us third place.”

This has been a true success story for Paul, and TRI has been a vehicle for enhancing his life, fostering his confidence and social skills and fulfilling dreams beyond all expectations.

His hopes for the future:  “I would like to score more tries!” 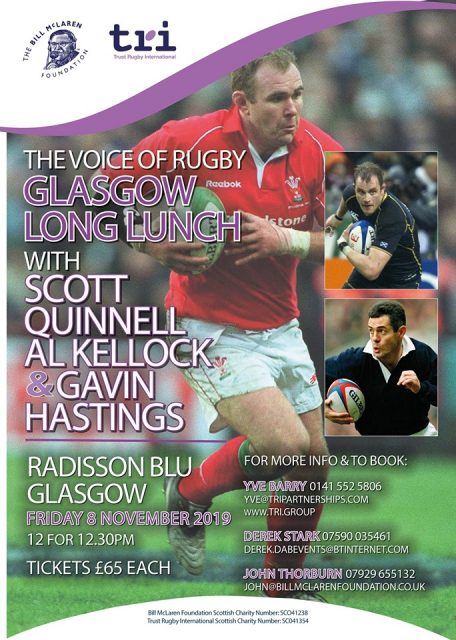