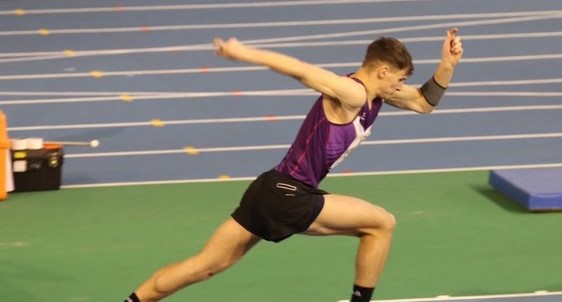 Henry Clarkson showed real talent in athletics when he was at school – and recently the former pupil hit the heights to win a national indoors triple jump title with Loughborough University.

The 20-year-old has been getting better and better of late and has a bright athletics future ahead of him once things return to some sort of normality.

Henry moved to Merchiston when he was 13, joining halfway through one school year as the spring and summer approached.

“That was perfect for me because athletics was about to start,” he joked.

“Seriously though, Merchiston was a brilliant place to be because there are so many different sporting options available and you get a chance to try lots of things and the facilities there are top class.

“I tried a bit of everything; I played rugby, cricket, hockey latterly and athletics.

“As you got to know your teammates so well during the school year, you always felt like quite a close-knit team, and there was always a lot of pride from us all going out there to take on other schools representing Merchiston at whatever sport it might have been.

“It felt like a band of brothers, and you tried to do everything for the team that you could.” 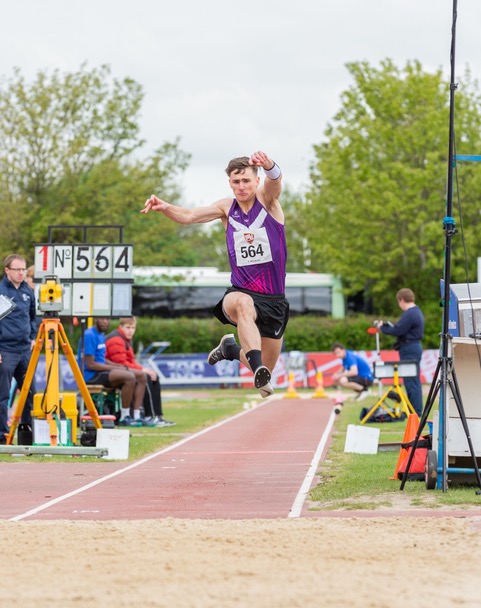 Athletics in the summer term was a sport that Henry was drawn to and at school his primary discipline and focus within that sport became the long jump.

He had clear talent and Craig Harrison, Head of PE and the Master in Charge of Athletics at Merchiston, said:  “Henry’s selection as the captain of athletics in his final year was probably the easiest sporting decision I’ve had to make in recent times at Merchiston.

“Henry possessed all the qualities of a young professional and his achievements in jumping were known to many since he had been in Chalmers West (Year 9/S1). Boys in school still ask now what his current long jump and triple jump distances are as he pretty much sets the standard at school!

“Watching Henry train at school showed the dedication and love he had for the sport, and there are few things as inspiring as watching Henry make massive leaps to win medals.

“He was a true inspiration at school, and I’m sure some of his records will last for many years to come.”

On his love of the long jump – which also sparked an interest in the triple jump on which he is focusing now at university – Henry said:  “I guess I was always just pretty ‘springy’ and I like the technical elements to the jumping events, and they held my interest a lot more than running around a track.

“I started to learn about how important all the different elements of a jump being in sync was to go the distance you wanted, and I just worked hard with Mr Harrison and other coaches and school mates to try and get better and better.

“The school was always really good at having a full fixture list against other schools and entering us into Scottish Schools events.” 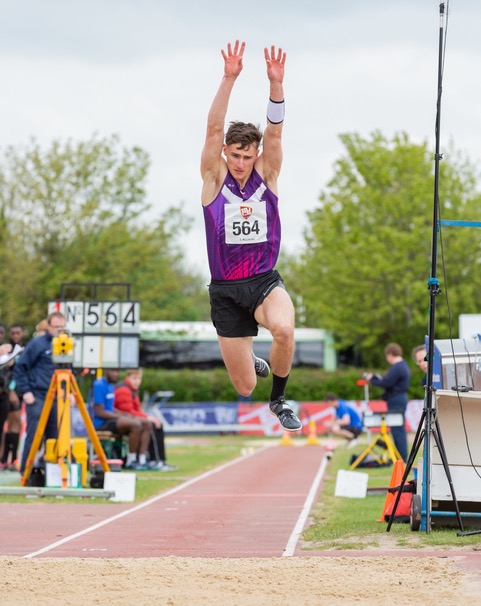 Henry left Merchiston in the summer of 2017 and headed down the road to begin his degree in Applied Sports Science at Loughborough University.

“I knew I wanted to carry on my education somewhere where I could continue improving my athletics, and the facilities and coaching available allowed me to do that,” he explained.

“You can be in the gym and suddenly look round, and some top-level elite athletes are training nearby, and that really spurs you on to want to keep getting better at your own sport and climbing the levels.

“We have a very organised training regime and great coaches, and over the last couple of years, I feel I have come on a lot and now really enjoy mainly focusing on the triple jump.”

And, after battling through some niggling injuries at times over the last couple of years, Henry’s high point came when he won the men’s triple jump event at the BUCS [British Universities and Colleges Sport] indoor Championships in Sheffield in February.

There he recorded a distance of 14.98 metres to win the title and was looking forward to the outdoor Championships in May, but they have obviously been cancelled due to the current situation.

“Winning in Sheffield was a great thrill,” he said.

“In a typical week I will do two sessions in the gym, one all-out technical session, one speed session and one plyometric bounding session so I put the hard work in and feel I can now build on the BUCS victory.

“I have also enjoyed representing the university at two Loughborough International Meets over the last couple of years – coming third in the triple jump last year – and I got my first senior Scottish vest at the Manchester International last year which was a proud moment.

“All being well I should graduate from my degree in September and then we will see what happens, but I would like to stay down in Loughborough to try and continue the progress I am making.”

Thanks to Henry for supplying the photos